The addition of a carbohydrate moiety to a protein molecule is referred to as protein glycosylation.

Based on ICH Q6B guidelines, a complete study of the glycosylated protein or monoclonal antibody is required, where is it essential a specific characterization including:

AMSbiopharma scientists have implemented a complete strategy for a complete structural characterization of your glycosylated biopharmaceutical at three different levels: Intact protein, glycopeptides and released glycans. 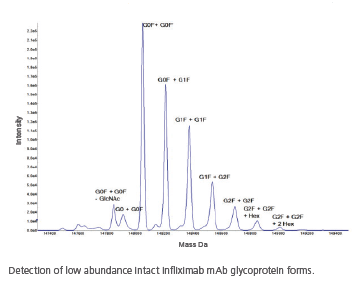 Glycan analysis: N-glycans are enzymatically released and the derivatized to be analyzed by HPLC-MS. There are a number of derivatization methods available for HPLC-MS analysis of glycans, each of which imparts different properties that affect both glycan retention on HPLC columns and MS analyses. Derivatizing reagents as 2-aminobenzamide, procainamide, reduction with permethylation for N-glycan analysis and rapid commercial kits. Released glycan identification is carried out by comparison against available database.